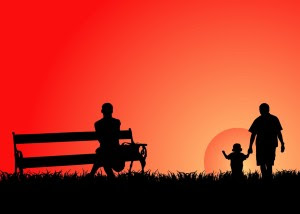 An Arizona law that goes into effect Tuesday encourages divorced parents to do more joint parenting.
The law requires courts to adopt plans that increase as much as possible both parents’ time with a child and forbids judges from giving one parent preference based on the parent’s or child’s gender.
The Arizona Republic reports (http://bit.ly/W4NR7W) that, under the new law, judges now must fine any parent who lies to the court or tries to delay court proceedings. Such fines were previously optional.
Physical custody will now be called parenting time and legal custody will now be called legal decision-making authority. Parents with decision-making authority have power over decisions of a child’s health and education and over personal-care matters such as haircuts and ear piercing.
There are stricter reporting requirements for parents to notify the other parent when they move a significant distance away. And the new law still requires judges to make decisions based on the children’s best interest, but their best interest now includes maximum time for both parents.
“We are moving away from the every-other-weekend custody arrangements or Mom automatically being named the custodial parent,” said Mesa family-law attorney Billie Tarascio.
The law is among a handful of new statutes that take effect Tuesday.
The new laws include a measure that increases the continuing-education requirements for real-estate brokers and makes changes to the course requirements.
Arizona is among the states leading the push for shared parenting time.
A handful of other states have passed similar laws aimed at parents in recent years. Unlike Arizona, which gives judges authority to decide exactly how much time each parent gets, many states have minimum requirements. Texas, Florida, Pennsylvania and North Dakota, for example, now require that each parent get at least 40 percent parenting time.
The standard visitation of every other weekend and one night a week adds up to about 20 percent parenting time for the non-custodial parent.
Other states have considered increasing parenting time. The Minnesota Legislature passed a bill this year to give the non-custodial parent at least 35 percent parenting time, up from 25 percent. But the governor vetoed it.
Advocates for mothers’ rights say the laws are a ploy to help fathers. Groups that combat domestic violence are watching the effort closely to assure it doesn’t expose children to an abusive parent.
The Arizona Coalition Against Domestic Violence initially opposed the law but later changed its stance to neutral after lawmakers made some adjustments.
Phoenix family-law attorney Tom Morton said he doesn’t expect a flood of parents seeking changes in their parenting time as soon as the law goes into effect. He said the change will likely be gradual. Courts require that a parent have some sort of change in circumstances before requesting a change in custody arrangements, and a change in law would not apply.

Shared parenting advocates’ main goal is that there be a legal presumption in child custody (i.e., separation or divorce) cases that the child or children be in the care of each parent approximately 50% of the time. This results in equal responsibility and equal opportunity for flourishing parent-child relationships. Equality should be the standard or starting point: the ‘burden of proof’ is on anyone seeking a non-equal custody arrangement.

Currently, many parents must expend considerable effort and resources to achieve shared parenting equality. This is because the current common custody arrangement is that the children will spend most of their time with one parent: that is, custody is not shared. This is often unfair to, and violates the rights of, all involved.

The current purposes of this page are that it to help interested people in Georgia find each other so they can work together for change. Google searches on these topics in Georgia yield few results, but eventually this page will be found by anyone researching these topics. (If there is such a group of Georgians working on this issue, please let me know, since we don’t want to re-invent the wheel).

This page will also serve as an archive of relevant information, links and readings. There is a lot to learn about history, the courts, procedures, how laws are made and changed, relevant social science, and much more. This page will serve as a source for materials for anyone seeking to learn what's necessary to make change.
This page will also provide resources for parents currently seeking a shared parenting arrangement. The legal system does not make this option an obvious or easy one: the relevant forms and procedures are developed on the assumption that the child(ren) will be with one parent, most of the time. Avoiding that result, however, can be done, and this page will help individuals overcome the obstacles.

Organizations, for informational purposes; no endorsements or connections implied

This webpage costs $15 a year to maintain; sometimes its been $30, when it's had two URLs. (The Facebook page is free, of course!). If it's provided anything of value for you, and you'd like to contribute to it financially *in any amount*, please send a message to the page for a link where you can contribute. Thanks!

The information and claims on this page are for informational purposes only and are not legal advice. Readers should not act upon this information without seeking professional counsel. You should consult an attorney for individual advice regarding your own situation.